I didn’t expect to laugh as hard as I did when I watched Will Farrell’s “Your Welcome, America” this Saturday night featuring himself as George Bush. It felt great.

It is almost the sixth anniversary of the start of shock and awe campaign of the Iraq war this Friday. I’ll always remember that because it happened on my birthday. And that day in my studio I just sat in front of a huge canvas and painted the word “war” with a blog sloppy dripping paint brush and left early. For pretty much all the artists I know, with their antennaes out there blowing in the wind, it was impossible to not let the war— everything—all seep into our thoughts and work. It was also almost impossible for me not to write about the election and view art in terms of of politics and what was going on in the world.

When Obama got elected, I felt as if my mother finally kicked the abusive stepfather out of the house and started dating a cool new guy that I actually liked. I still can’t quite believe that they live together, let alone got married. Yet in spite of finally feeling freed from the last administration and the politics leading up to its ouster, I welcome any kind of therapy I can lay my eyes on. So in addition to laughing at Will Farrell’s rendition of 43, I was just as relieved to discover the works of Brooklyn-based artist Liz Markus. 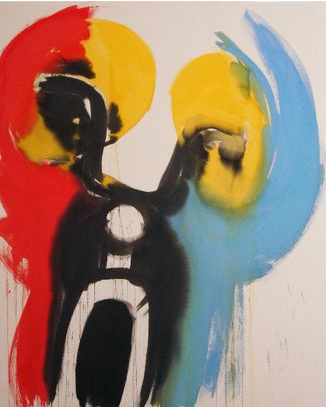 With rapid brush strokes and streaking paint, Markus creates images that bring humor and light to sensitive and charged subjects. Her restrained use of saturated primary colors prevents these images from being too candy-hued-psychedelic, and are instead bold and resonating. She pours paint onto her canvas and lightly controls the flow of the colors, resulting in haunting images that make us think we are sure of what we are looking at…or not. We wonder, “Have I seen this portrait before?” “My G-d, is that Nancy Reagan?” Calling images stored in our subconscious to the forefront, Markus engages viewers in an interplay between memories of the past and present, fact and fiction. You can catch her upcoming solo show at ZieherSmith”s New York gallery from March 19 to April 18, 2009. 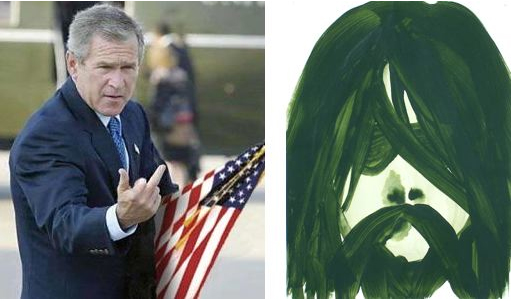 Kimberly Brooks: What was the single moment that led to this body of work?

Liz Markus: During the 2004 presidential election I would get up at 6am everyday and paint on paper in a very stream of conscious way while listening to Air America. As I became increasingly frustrated by the Bush administration as well as the corporate office job I still had, a hippie appeared in my work. It was an image that immediately resonated with me. It represented freedom, rebellion, down to earth values, in short everything that I wasn’t seeing or experiencing around me. This moment was the beginning of a very rich vein that completely took over my studio for the next three years. I was interested in the arc of the hippie experience, from innocence and optimism through psychedelia to the Manson murders, Vietnam and drug burnout. I imagined a burnt out hippie wandering around in Mexico with his motorcycle and painted those subjects in somewhat abstracted ways. 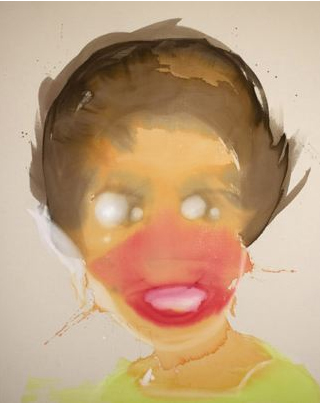 KB: I think I met that hippie several times over. Definitely while growing up in Marin County and attending UC Berkeley. I think he lives in a lot of us. What inspired you to paint Nancy Reagan?

LM: Too young for a first hand experience of the 60’s, I was 13 when Reagan took office. My knowledge of Nancy Reagan was limited to her penchant for red Bob Mackey dresses, her just say no anti-drug campaign, and the obvious power she held in the white house. My parents ingrained in me a distaste for the Reagan administration but I didn’t think much more about Nancy until I came across a classic photo of her in Vanity Fair several years ago. I knew immediately that I needed to paint her, there was something about her face that was compelling to me. Initially I had hoped that she wouldn’t read as Nancy but as a generic WASP-y woman of that era. Nope. Everyone always knew she was Nancy. I’ve painted her many times and wondered why I have this attraction to her image. Looking back at Nancy now, I still absolutely dislike her politics and think she must be very tightly wound up inside. However, I can see that she was a strong and powerful woman in a time when there weren’t a lot of Hillary Clintons or Michelle Obamas around. She fascinates me. 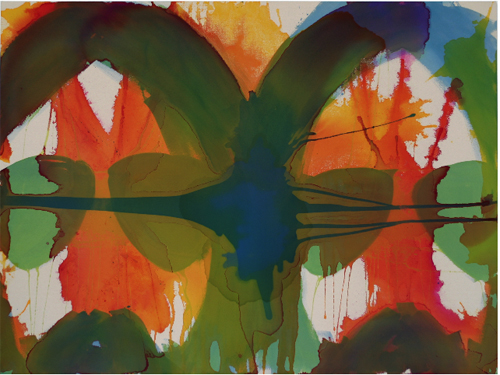 Liz Markus, All These Things Were Way Beyond My Mind, 2007, acrylic on canvas, 54 x 72 inches, Courtesy of ZieherSmith Gallery

KB: How do you create your canvases, what is your process?

LM: I stain unprimed canvas with acrylic paint. They are often on the floor while I paint. I use brushes at times, but I often pour the paint on directly and tilt the canvas to control the movement and flow. The thing I really love about staining is the reliance on chance. I can control the paint to a certain extent, but as the paint is very fluid and seeps quickly into the cotton fabric, it does it’s own thing, as well. So there is always a wonderful but also anxious moment during the process while I wait to see how my intentions and fate interact to make the final image. 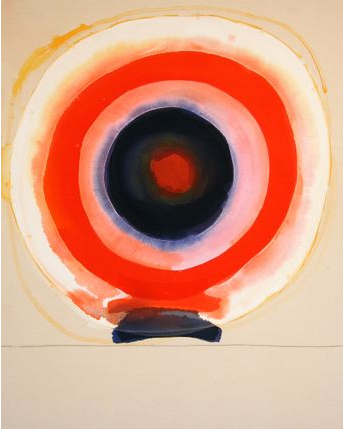 KB: You’ve talked about the Hippies and the Nancy Reagans, but what about the other subjects that appear in your work, like Noland targets, taxidermy, Johnny Rotten and oranges, for example?

LM: It’s hard to describe in words, but visually, it all makes sense and I think that is an important point. I paint because I am expressing things that cannot be simply explained on a verbal level, I wouldn’t have to paint them if that wasn’t true. That said, I think the Noland targets reflect an intense interest in the cannon of modern painting. On a different note, I associate taxidermy with the classic WASPy interior. The stuffed animals had an uncanny resemblance to the residents of the houses and began to act as surrogates for them in my paintings. Johnny Rotten and oranges, well, I just thought they would be cool to paint.

KB: Is there a particular work of art that inspires you?
LM: I have always been a huge fan of art history and it has played an important role in my development as an artist. I grew up in Buffalo going to the Albright-Knox Art Gallery and its strong collection of Abstract Expressionist painting is what originally inspired me to be an artist. De Kooning continues to inspire me. The attraction/repulsion he has for his subject in his women series reminds me of how I feel about Nancy. To me he is the ultimate painter.
  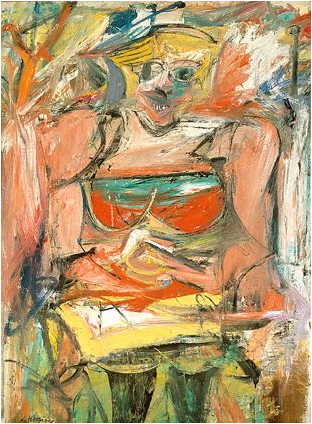 Liz Markus is based in Brooklyn, New York. She received an MFA from Tyler School of Art and a BFA from School of Visual Arts. Her second solo show at ZieherSmith’s New York gallery will take place from March 19 to April 18, 2009. Her work will also be included in **ckheads: Portraiture for the Silicon Enlightenment, curated by Angela Dufresne, SCA Contemporary, Albuquerque later this year. Her exhibition history includes a solo exhibition at Galleri Loyal, Stockholm and recent group shows at Gallerie Opdahl, Stavinger, Norway; James Graham & Sons, New York; and Werkstatte, New York among others. Her work is regularly shown at various international art fairs including NADA, Miami; Zoo, London; and MACO, Mexico City. 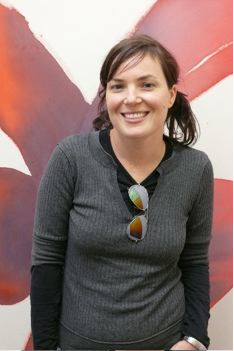