The Gap Logo, New Coke and the Legendary Walter Landor

The introduction and subsequent rescinding of The Gap Logo unleashed a series memories of my younger self and the visionary designer Walter Landor.

I was a freshman at UC Berkeley. Being the always drawing-painting-coloring-designing “creative-type” kid, my father thought I might enjoy a lecture at SFMOMA by the legendary designer Milton Glaser who was introduced by his West Coast Counterpart, Walter Landor of Landor Associates. I was raised in Mill Valley so my university, my hometown and the glittering lights of San Francisco were all only a bridge away.

Although I am an artist today, when I was eighteen, my path was not so clear. My first generation American father was still in the chrysalis of his first career as a prominent surgeon (he would then go on to become a best-selling author). In middle and high school, I often attended Sunday morning rounds and an occasional operation with my him before he picked up bagels and lox for Sunday brunch. I received the book “The Makings of a Woman Surgeon” four Chanukas in a row. Whenever I brought home a report card in high school it was often met with “What?? A ‘B’ in Chemistry? How are you going to get into medical school with a B in Chemistry?!” During our talks about what I wanted to do with my life, he would stroke my hair and say “Honey, you can be anything you want as long as you’re a doctor first. Then worry about the rest.”

The prospect of enrolling in art school was as likely as visiting on a distant galaxy via jet pack. So getting an internship at one of the premiere design firms in the world while in college seemed like a great way to expose myself to a creative field and one that my father might (*might*) take seriously enough to justify not going to medical school. 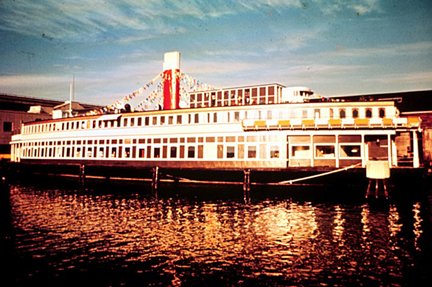 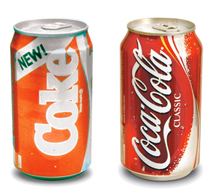 This is how I found myself, at the tender age of eighteen, wearing panty hose, my mother’s silk blouse and fake pearls, smack in the middle of a boardroom on a Ferry Boat called The Klammath at Pier Five as Landor Associates was about to launch “New Coke”. Like the Gap Logo fiasco, the introduction of New Coke, which has now become a source of lore amidst business schools and popular culture, was also met with outrage by a public which was just fine with their existing coke, thank you very much. Even though it had nothing to do with the design itself, the logo, too, which had shed it’s seraphs from “Coca-Cola” and abbreviated itself with to “New Coke”, also seemed like a fraud. Phrases like “Brand Loyalty” and “Brand Equity” were coined shortly thereafter.

Here is a video of a younger Walter Landor “The Decanter,” a promotional film produced by Walter Landor and Associates in the 1960s. It shows the start-to-finish process of several of Landor’s designs for Old Fitzgerald whiskey, narrated by Walter himself.

Design story: The Decanter from Landor Associates on Vimeo.

But that’s not the exciting part of the story. The exciting part was the environment and the laboratory feeling Landor Associates had at the same time. This was the set of Mad Men. All the women were *gorgeous* and the men were tall and white and would swagger in and dictate a letter to their secretaries and then walk into their offices, light up a cigarette and call London. Landor had about eight hundred people and 16 offices around the world. The headquarters was on a huge ferry boat. But it was also like being inside a brain. They had a word department where people would make up the names for the juices would appear on a Dole Pineapple container. The design department was filled with designers, photographers and architects working on the latest airlines (British Airways, JAL, NorthWest) or gas stations. In the main conference room there would regularly be a twenty foot shoji screen filled with logos for a new client. One summer I spent a majority in a small room archiving Walter’s collection of glass bottles for the Smithsonian Institute. Another I worked with the architects who were creating a new look for Shell Oil. I squirted syringes of soap bubbles to help photographers photograph glasses of wine. I remember one of the designers, Elaine, working on the milk Carton for Lucerne with mock up milk cartons and logos of cows everywhere. She had a picture of herself with Andy Warhol above her desk. 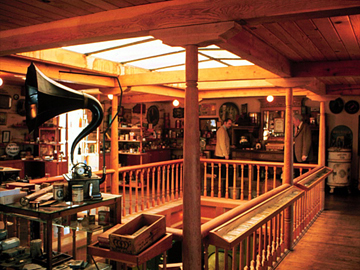 I interned at Landor Associates throughout college and full-time during the summers. I wrote all Walter’s speeches and Walter, then in his seventies, became my mentor and was more of a figurehead to the company and industry that he helped pioneer. He had silver hair and a bright light around him that drew everybody in like an artistic yet mischievious Obi-Wan Kenobi, always telling me and everyone around him how to really see. He would hold up his hands towards a tree outside his office and make a cropping shape all the time and say “Look through there. Now See? That is art. Art is everywhere. You just have to see it.” One of the projects I worked on was the business plan for the “Walter Landor Center for Creativity Research”. He taught me to see at the seagull in the B of A symbol or the Yin Yang symbol within the old Safeway supermaket logo. His imprint on the world of design is felt every time you look at an airplane, walk into a supermarket or anything to with brand or logo design has Walter’s and Landor Associates imprint written all over it.

Artists at designers are separated at birth. Much of the problem solving and creative thinking at the genesis of every project are no different. And much of what I learned from Walter and Landor Associates has informed every part of my career afterwards. Walter passed away in 1995 at 82 and I think about him all the time and smile and *see*. 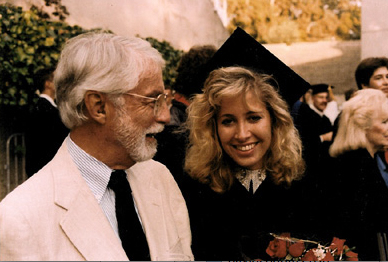 Walter Landor at my graduation.